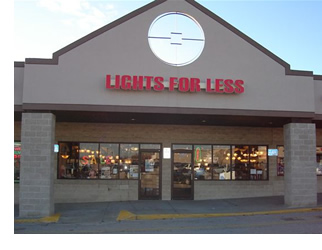 We know lighting. We’ve been working for several local home lighting and furniture companies over the years and when we were asked to help ramp up an online marketing solution for Lights For Less – a discount lighting store in Brunswick Ohio – we jumped at the chance. Starting from scratch, we were tasked with launching a brand new website and domain name, optimizing it for the search engines and providing an ongoing strategy for online marketing – all with a very limited budget of a couple hundred dollars a month. It was a tall order but within a couple months we started driving traffic to the new site. Then, after a few more months we even doubled the traffic! This is a tough one because it’s a local retail store in a small town in Ohio. Not the type of site that’s going to get thousands of visitors per month. So progress would be measured in small increases but those small increases could mean big improvements to their bottom line as they continue to make themselves visible to the potential customers in Brunswick and surrounding areas.

Below is a basic traffic comparison from June 2010 after we started tracking traffic. It’s compared to a couple months later in August where you can see that overall traffic has doubled in only a few short months.

But you counter “Only 107 visitors?”, “Is that all they’re getting to the site?”. Well, imagine this. Let’s say that 25% of the people that come to the site immediately leave. Another 25% are interested but don’t go to the store. Another 25% show up at the store but don’t make a purchase. That leaves us with 25% that show up and make a purchase sometime in the next 6 months. That’s about 26 customers. Let’s aim very low and say that each customer spends $200, knowing that you could easily spend thousands of dollars on interior and exterior lighting. That’s $5200. The client spent $200 for that month. Not a bad return on investment right? Even if you cut that number down by half we’re still adding thousands of dollars of revenue to their bottom line each month with only a small investment.