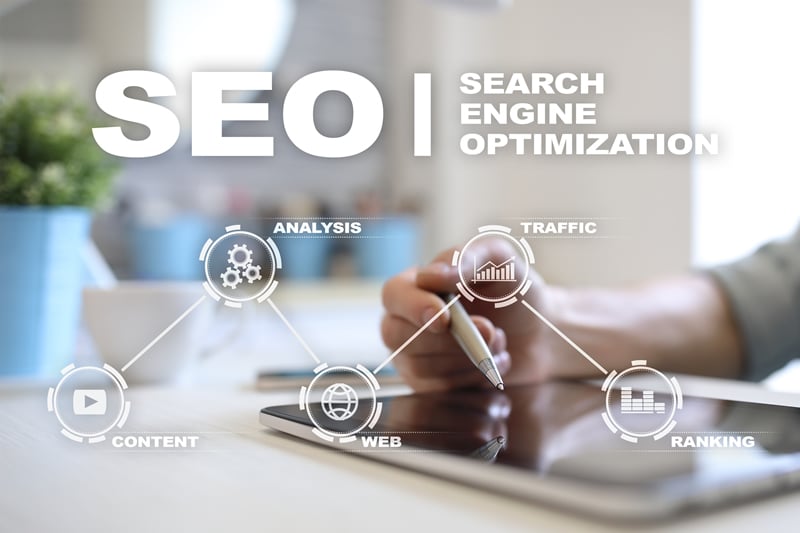 When it comes to your website, you just want it to be found by the right people. But in order for your site to show up in search results for those who are actively searching for your products or services, you have to make sure it’s performing right. That’s where SEO comes in. There are so many factors that contribute to your overall organic search rankings that it’s easy to get lost and be unsure of where to start. We’ve compiled a list of six actionable items you can start checking off your SEO list right now that will make an impact on your website “health” and ranking.

Beyond these tactics, there are typically other steps we take in a comprehensive strategy to improve your organic rankings and search traffic. Talk to our team today about what that strategy could look like for your company!

If you already have a WordPress website, that’s great news! While you don’t have to have WordPress to do SEO, this platform makes it much easier to not only implement changes and updates but to see how different pages on your website are scored for target keywords.

This is possible through a WordPress plugin called Yoast SEO—available as both a free and premium version. Yoast makes it really easy to add a meta title, meta description, URL slug and focus keyword every time you create a new post or page on your site.

If you’re not familiar with plugins, we’d be happy to take a look at your site to see what you already have and what’s possible to add if needed.

Crosslinking to other pages on your site is a great way to direct users even further through your content, but it really does no good when the links don’t work! In fact, broken links actually hurt your site’s SEO value and overall ranking. An easy way to get rid of this issue is to go through and clean up those old or broken links by either updating with new links or redirecting the old ones.

At Sanctuary, we have tools we use like SEMRush to help us identify these broken links, but you can start doing this yourself by clicking on each link you see within your website content and ensuring that it goes to the right place. If not, you’ll need to log in on the back end of your site to make the update. 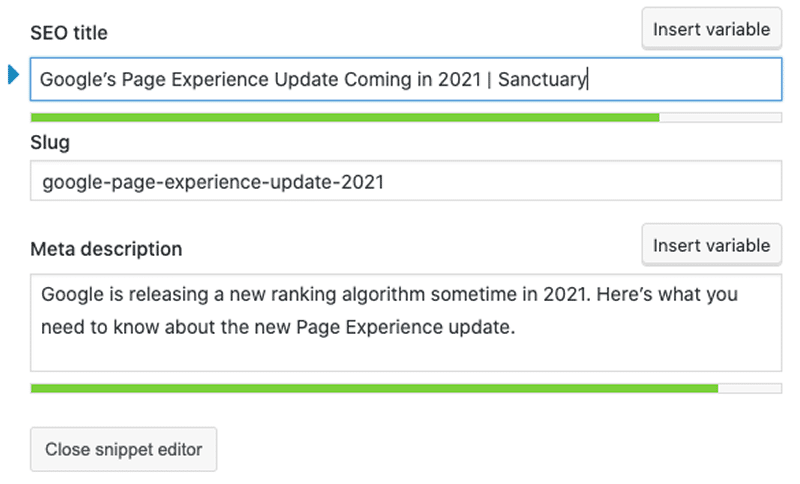 One of the first things we do for a new client is to run a site audit to assess the health of your website. This clues us into the different issues that are present on your site that need to be tackled in order to improve your ranking. These issues include things like:

Things like meta issues are usually quick fixes and just involve taking the time to write unique, keyword-rich meta titles and descriptions for pages that don’t have them or that have duplicates. If you’re not sure what a meta title or meta description is, here’s a quick summary:

A meta title and meta description work together to tell search engines like Google what a web page is about. These elements provide a great opportunity to use important keywords that people are searching for so that when your content shows up in search results, they know it will satisfy their needs. A meta title must be less than 60 characters long, while a meta description should be kept to less than 160 characters.

Another quick fix you can make is to the actual content on your site. Make sure that each page has a top heading (H1) and subheadings (H2s and H3s) throughout that contain important keywords. For example, if you have a web page about air conditioners, be sure to include air conditioners in the page title and subsequent headings throughout.

In addition, you should aim to have at least 250 words of content on each page of your website. There are definitely a few pages where that doesn’t apply, such as the ‘Contact Us’ page or the sitemap, but generally speaking, you want to hit that target for the majority of your webpages.

Why? It not only signals to search engines that it’s a “real” page, but it shows that you’re credible and putting substantial content out there. It also gives you more opportunity to tell search engines and internet users about what you offer and what your business is all about. The more information and content search engines have to scan, the better they’ll understand who you are and who needs to see your content.

Use a free tool like Google’s PageSpeed Insights to test the speed of your website. This particular tool actually generates suggestions for how to improve page speed on a specific web page after it’s done analyzing it. Suggestions will probably include a few fairly simple things like condensing image sizes (which you could tackle yourself if you have the time!), among other coding and development tasks that an experienced team should handle. But the first step to making improvements is seeing where you stand now—and learning how to get better.

Condense Images
Make sure that images on your site aren’t too large, because that could be slowing down overall site speed. As a general rule when uploading an image to your site, we recommend keeping it between 1500 and 2500 pixels wide so it displays correctly and doesn’t slow down the page you use it on.

Add Alternative Text
In addition, each image on your site should have “alternative text” or “alt text” to let search engines know what the images are showing. This is another great opportunity to include keywords if applicable. You can also add title text, but that’s more for telling the end-user what an image is about, rather than the search engine. For example, if someone were writing an article about leash training a puppy, they might include an image of a puppy on a leash. The alt text for that image would be something like “puppy walking on leash with owner practicing leash training” (with the key phrase being “leash training”).

Add More Visuals
Not only should you optimize the images that are already on your site, but you should also try to add more images or visuals where at all possible or logical. Internet users are more interested in visual content, which means they’ll spend more time on a page that’s more visual—and Google knows that! A web page with more diverse media such as images, infographics and videos has more ranking power than one with just purely text.

Contact the Sanctuary team for more extensive help with SEO.

Changing meta titles and adding keywords into your content isn’t too hard to tackle on your own, but there are definitely elements of SEO that you should have the experts take care of. We’d love to help you take these couple of steps even further to see great improvements in your organic search results. Contact us today to learn more about our SEO services!